Time for some new posts

It's been a while since I've updated this blog.. in part because I've been trying to decide on what approach to use.. scans or photographs, as well as whether to add to previous posts or start fresh.
The decision I reaced is to do all three .. scans , photos, and start fresh.
So for starters I'm goiing to post scans and photos of the first section of my Zappa collection.. next comes the Bizarre/Discreet/Reprise releases, then the CBS/Polydor/Zappa issues. . My collection does not include any posthumous releases. Perhapsthe Zappa estate is releasing them as he would have wished, perhaps not, but I suspect not. If you examine his last releases before he passed away, you can see that he had abandoned the "offensive" titles and covers in favor of a far more restrained presentation.. which I found rather appealing, actually...
However, back to the first section of my collection, which is while he was with Verve/MGM:

Freak Out: The first Zappa Verve cassette rel;ease I ever obtained .. seems to be a Record club of America copy.. that's the only ones of Freak Out I have ever seen, actually.
Although cassettes had only been available for 2 years before Frank left MGM, the RCoA still had plenty of stock left over so they were always included in the list one could select  their 8 or 10 "one cent" cassettes, up until probably 1972. 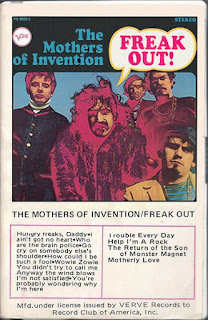 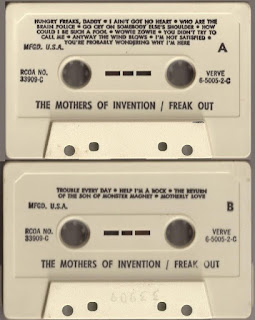 The pressings (tapings?) were generally shoddy, as well as the label print, which was stamped on the plastic shell directly from day one...
I have, actually, never seen a genuine AmpexVerve release of Freak Out, although there must surely be some copies in existence. I'm always looking to see if one turns up. Especially a Canadian one, since all the Ampex cassettes here came in J-card releases.. even those imported from the US...
I'll post the j-cards later on - they look really nice , seeing as they were designed and printed professionally by a tpp level printer whoi does album covers professionally... I use them instead , and seal the snapcases in a ziploc so they don't  get damaged or worn...

Absolutely Free & Lumpy Gravy (US):
The two issues I don't have..  anymore, although I still have scans to post. I did lose a lot of tapes that were in the boot of my car before it got .. er... borrowed. If anyone sees either copy on verve I'd appreciate hearing from you..! 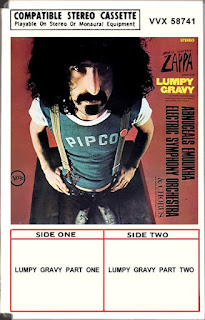 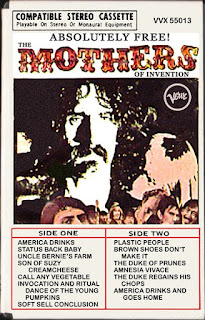 Lumpy Gravy (UK version)
I did manage to obtain a British version.. I have no idea if he was more popular in the U.K. in the 60s
.. certainly he got more press, since I run into quite a bit more newsreel footage  from the UK, on Youtube , and the like. I think this is an early 70s issue, however, since it looks identical to the Polydor/Track "Who" cassettes from 71 with the black spine.. 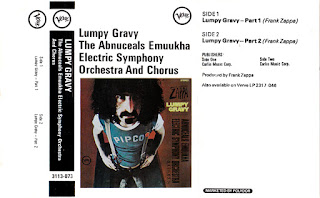 We're Only In It For The Money
I was going to say that these were hard to find, but, hey,. ALL of them have been insanely hard to locate..
I've quit collecting four or so timesin the past,  well, this is, I suppose, number 4, and each time just reaquiring what I had before gets harder, although there's no way I would even want to, at this stage. The last collection was just too large.
This time I've cut everything except cassettes.. I have some really rare and desirable 8 tracks such as Harrison's Wonderwall music, etc. But no way am I getting more..
The Zappa original MGM releases, on cassette, , however, have proven to be the most difficult to source I've ever come across.
I'm always surprised to locate one, then.. 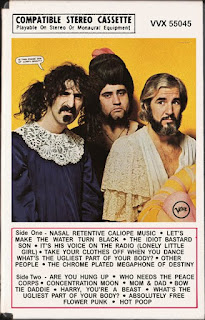 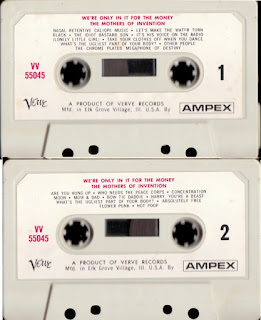 Ruben & The Jets
The previous tapes have had their scans cleaned up to a small degree, since the outer box label was often not always in the best condition..
This one, and the one that follow,  however, didn;'t need a thing. I rarely see snapcases in such a good condition as these two were. Amazing! 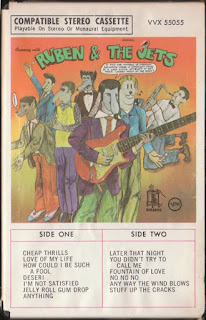 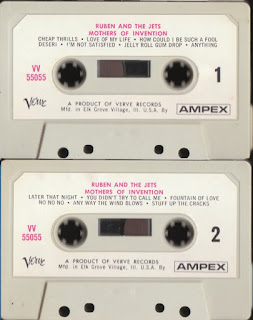 Mothermania:
Got this one same time as the Ruben and the Jets.. what a score! These are all so steenkin rare that I NEVER expected to find them.. 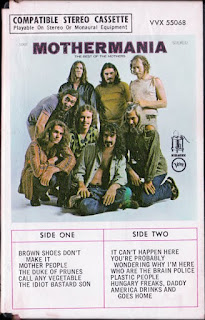 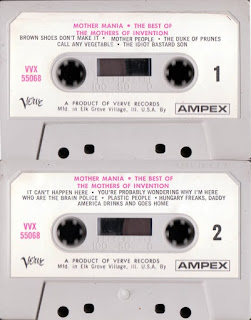 The ***** of the Mothers
Why they decided to create such an unlistable title for this tape confounds me. Unlike Mothermania, this wasn't an approved compilation, but Verve owned the rights for all his pre 1969 material, so I guess they could create whatever titles and artwork they wanted. I suppose they were trying to create a "Zappa-esque" cover. Didn't wash. IMHO. 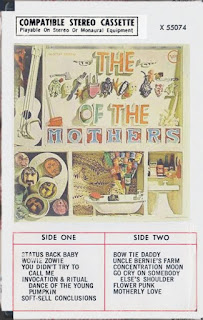 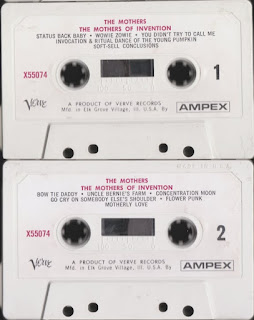